Still Wandering.... no we did not fall off the face of the earth.

I haven't thought I had much to tell of late, but now getting started I guess there is more report than I thought.  We haven't done as much this year as in the past so I was waiting for some fun and exciting things to blog about, but we have done more relaxing than anything else.

This year has had different feel than the others, we were planning to go home for Christmas and I think that has caused us to feel like we were in a holding pattern before our return to Canada.  We've sat at Willow Tree RV Resort for 45 days which is our longest stop we've had in our winter travels thus far.  This is a nice resort about 30-40mins from Myrtle Beach, out in the quiet countryside with plenty of flora and fauna to look at.

While much of M.B. is closed for the season, there is enough going on to keep the contented traveller occupied if you feel the need to get out of your chair.

The X-mas season was in full bloom here and we went to watch the annual Little River Christmas Light Regatta on the inter-coastal waterway. 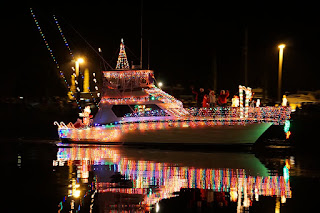 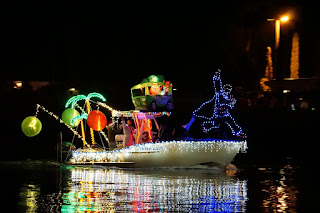 Even Elvis showed up!
"Nights of a Thousand Candles" is an annual Brookgreen Gardens﻿ festival featuring an amazing light show throughout the beautiful grounds of the park.  Sprinkled around the park are bands, choirs and other X-mas themed displays.  The real star of the show are the thousands of lights and candles in and around the many statues and gardens. As you walk the grounds taking in the spectacle, you can't imagine the amount of effort they put into transforming this into a glowing wonderland. 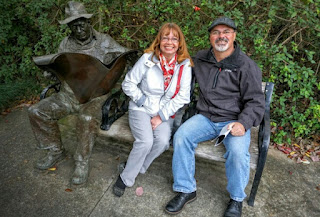 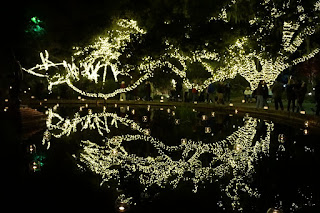 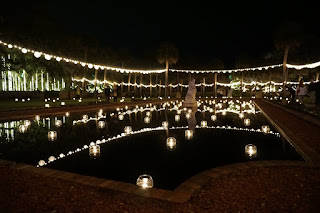 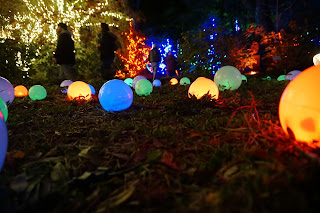 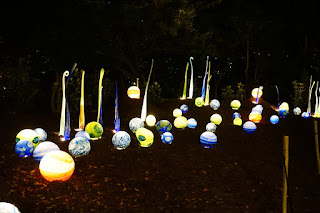 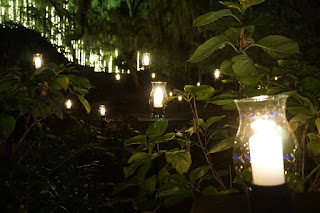 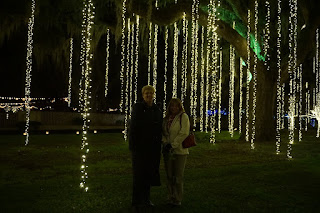 Aunt Cheryl and Detra
﻿
﻿
We went with Aunt Cheryl and Uncle Fred, enjoying the music, delicious hot apple cider and a fine southern meal in the food tent.

The waiting mode was finally over when we ran home for Christmas enjoying the festivities we had missed last year.  We met up with friends and family over a few days before heading back to M.B.

New Years day signaled it was time to move and we were ready to start rolling.  We knew we were heading south to either Savannah or Charleston, we didn't know which until we were on the road.  These places we've been to before but felt we hadn't spent enough time in either.  Once we started rolling we hit Charleston and decided it was to soon to stop for the day, so on to Savannah it is!

This is the first time our aversion to planning and booking in advance has caused us problems.  We wanted to stay at Skidaway Island State Park but when we got there it was booked solid for the night.  So we thought OK, we'll just head off to another campground just a couple miles away, sure enough it was full also.  Mmmmm, maybe we'll call around, we called every park in the area, not one spot was available big enough to accommodate our fifth wheel.

Well, this is when we came to the realisation that our only option was......WALLYDOCKING!!!!!

For the people who havn't heard of this, you have probably noticed RV's parked in Wal-Marts from time to time.  This is a win-win situation for the company and the traveller.  A free nights stay in the parking lot for the RV'er and Wal-Mart receives the business and much goodwill from the RV community.  Not all Wal-Marts allow this, and there are plenty of ways to find out which ones do.  Our RV GPS has all the info you need programed into it from the factory.  Generally as a courtesy you go in and ask the manager for permission and he/she will tell you to park at the back of the lot and that's about it.

When we started this new lifestyle of ours Detra told me she would do it on certain conditions, one of them being that she never had to camp in a Wal-Mart parking lot.   We are now on our third winter of snowbirding and I have finally worn her down enough to give up on what ever standard of living she was hoping to cling to.  Heading to the nearest Wal-Mart.  We pulled into the lot in a neighbourhood that shall we say was past it's prime nor did it give us a feeling of safety.

Detra  "There are no other RV'ers here"

Detra  "I'm not getting out of the truck"

Detra  "Nope, see you if you get back"

There was another store just a few miles away, it was getting dark and we were getting desperate.  Pulling into the second Wal-Mart was a completely different feel.  There were four or five RV's  already parked in the well lit area at the back.  We settled in and watched as more RV'ers slowly trickled in.  It seemed we weren't the only ones caught out without a place to stay here in Savannah.  By the time they stopped rolling in, there were at least a dozen of us staying here courtesy of the Walton's.  Most were in travel mode and stopped for a quick night's rest and back on the road at first light.


This is all common practice for many RV'ers but this was our first time and it was good.  Sure in the beginning we were scared, we fumbled a bit, we knew others were doing it, it was exciting and in the morning we felt a little dirty, but that soon passed.  Wallydocking is a great way to save some money and in a bind we'll do it again. 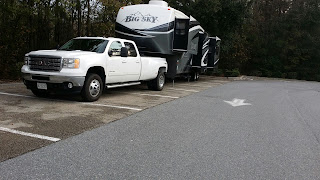 Wallydocking, the arrow points to the future. 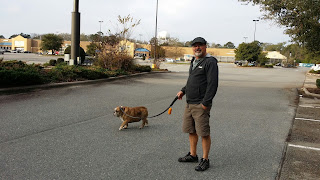 We did find parks for the rest of our stay here in Savannah, one night at Skidaway and two at Red Gate Campground.  Red Gate's camping is around an open field but what stands out here are the grounds. Around the park are ponds, farm animals, trails and just a nice country feel but still close to Savannah.

﻿
We just love Savannah's downtown.  It is one of the prettiest, walkable and historic cities you could spend the rest of your life in.  There are endless beautifully restored homes, a water front for a relaxing stroll, tons of restaurants and 24 squares with grass, trees, historic markers and benches to just sit and take it all in.  We just roamed around on warm sunny days soaking in the glory that Savannah provides. 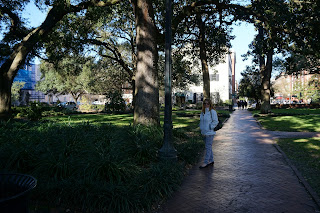 Strolling through a square. 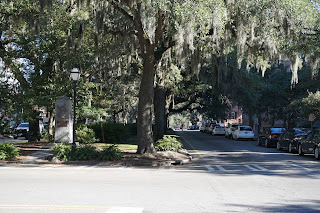 Tree lined streets.
﻿
We were heading south to Florida and a visit with Detra's mother Donna.  Along the way we stopped to checkout The Great Outdoors RV Resort which is a huge ownership park.  They have everything from a concrete pad up to huge houses with garages big enough hold your 45ft motorhome and a few cars and toys along with it.
Cross the state to Donna's place for a couple of days of visiting.  Florida is prime snowbird country and the prices here reflect that.  With the high cost resorts here and low Canadian dollar we needed a more economical place to stay.  Fuel prices are so low ($1.84/gal for diesel) we decided to run for the hills, Texas Hill Country to be exact.   With a stop in Alabama and New Orleans along the way we are going to hightail it to Texas.
That is where we are now, we'll catch up to the present in the next installment of the Wagon, till then, we'll hitch our horse an' set awhile.
Homesteading in the Hills,
Scott
﻿
﻿
Posted by Unknown at 15:52

Where we have been 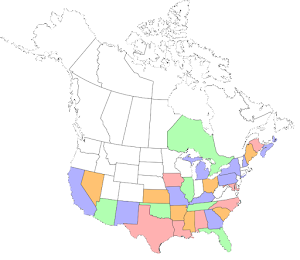 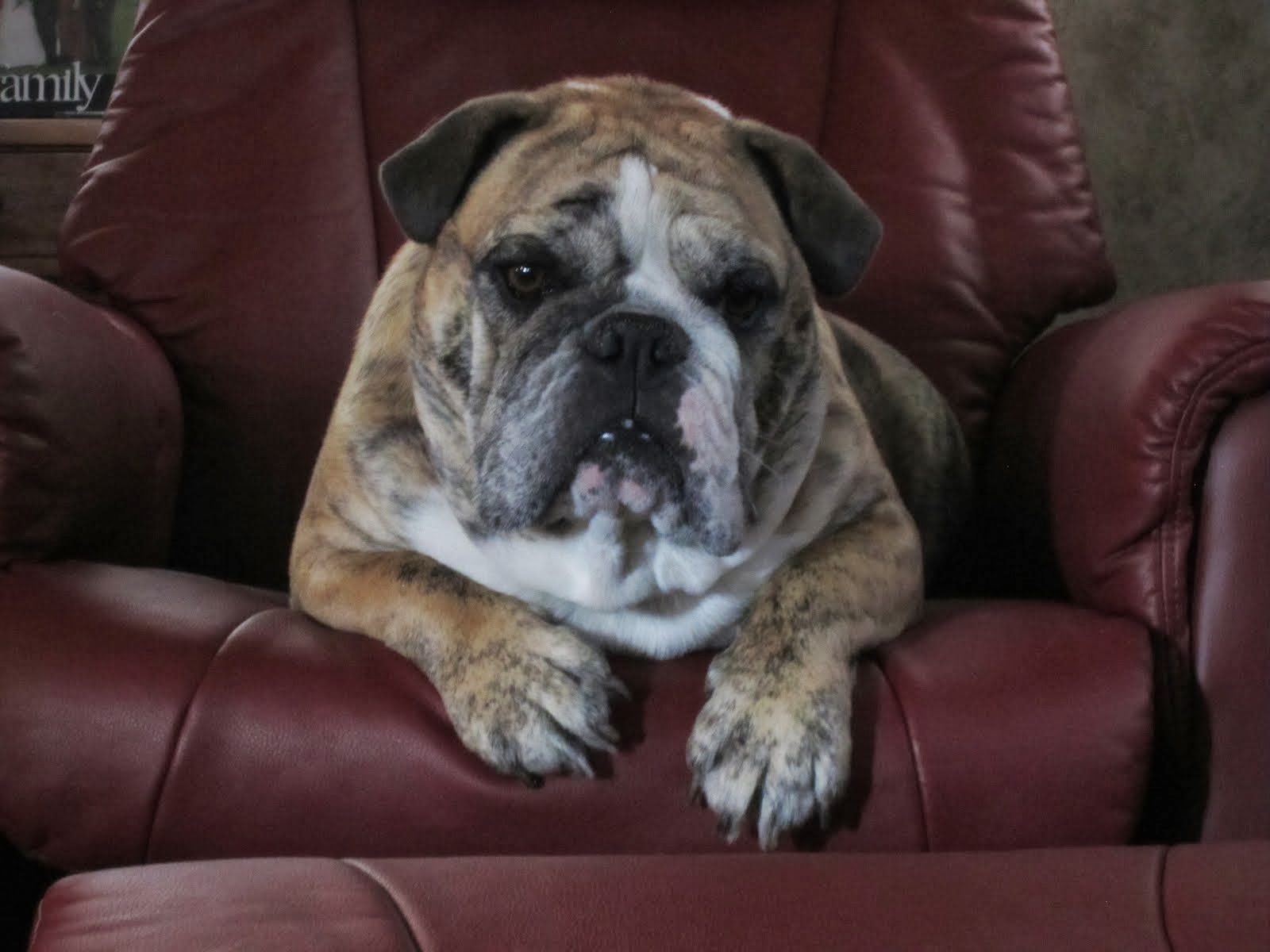 Total visits to the Wagon